Some ideas for Madcar: Multiplayer

Some ideas for Madcar: Multiplayer

Hello, I love this game so much, but couple of features are missing
- playing with friends (like having a friendlist and challenge them)
- playing with under 6 players (even by reducing the rewards)
- adding an entertainment in the waiting room (maybe be able to jump and add a sort of Parkour could be fun)
- creating a solo mode

Thanks for reading this :) 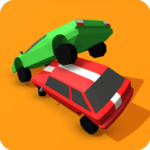 Re: Some ideas for Madcar: Multiplayer

Thank you for taking part in the improvement of madcar and sorry for the late reply.

In fact most of your ideas are planned since months now but were never done due to many problems. Even now I really hesitate to update this game because the current main problem induce that if I had to update it, the graphics would look like this:
https://www.youtube.com/watch?v=hVmDbYAsj1Q

"- playing with friends (like having a friendlist and challenge them)"
This idea was planned a long time ago but was never done. This was under the Teams feature (which has its section in the menu).

"- playing with under 6 players (even by reducing the rewards)"
I planned to create a pannel where we can vote either to force the party to start, either to change the gaming mode (arena, maddrome, ...)

"- adding an entertainment in the waiting room (maybe be able to jump and add a sort of Parkour could be fun)"
- I thought a lot about this but I think I'll not do this for madcar. There is too much things to change. But it'll be created in my future racing games. We'll be also able to get out of our car and get into cars of other people etc.

"- creating a solo mode"
I think I'll never create games with AI. It's too complex